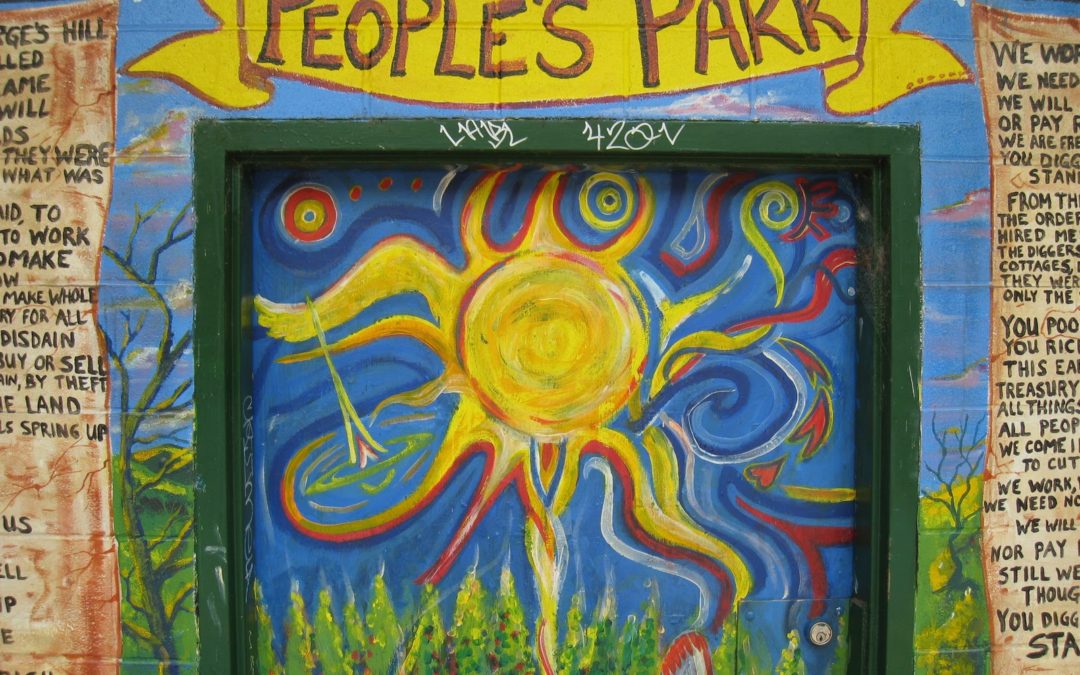 People’s Park was a precarious battle waiting to happen. The air was already charged with visceral tension. On the government’s side, there was a desire to pull the plug on the Vietnam War protestors and politically radical groups. On the activist public’s side, there was continuous frustration with the war, anger over the never-ending struggle to gain various civil rights and a general pushback of suppressive government and corporate actions and policies. No one could foresee that it would forcefully erupt over a small patch of earth in Berkeley.

The actions were simple. A group of people took over some unused land owned by the university just east of Telegraph Avenue, and began to create a park.
There was an organizational meeting. Five days later the Berkeley Barb published an article written by “Robin Hood’s Park Commissioner.” “The University has no right to create ugliness as a way of life….A Park will be built this Sunday between Dwight and Haste. The land is owned by the University which tore down a lot of beautiful houses in order to build a swamp. The land is now used as a free parking space. In a year the University will build a cement-type parking lot which will compete with the other lots for the allegiance of Berkeley’s Buicks. On Sunday we will stop this shit. Bring shovels, hoses, chains, grass, paints, flowers, trees, bull dozers, top soil, colorful smiles, laughter, and lots of weed. . . .We want the park to be a cultural, political freak-out and rap center for the Western World . . . .This summer we will not be fucked over by the pigs “move on” fascism, we will police our own park and not allow its occupation by imperial power . . .Nobody supervises, and the trip belongs to whoever dreams.”

On one hand, People’s Park was a nonpolitical, life-affirming act of community bonding, gardening and positive energy. Many people helped plant trees and vegetables on that innocent assumption. On another, it was a radical rebellion that activist leaders politicized as a stand of the People against the Establishment. Abbie Hoffman declared that the park would “suck Reagan into a fight.” On yet another, the university and government bodies saw it as a dangerous symptom of chaos and the destruction of civic order by hippies and radicals. They reacted as if it was war, and those involved with the park were enemy combatants.

Berkeley was a surreal place to be during the People’s Park demonstrations. The park was quickly made off-limits with the erection of chain link fences. On “Bloody Thursday,” people protested, some violently attempting to pull down the fence and throwing things at the police. Governor Reagan then declared a State of Emergency in Berkeley, unleashing the National Guard to occupy the city — my city. Tanks rolled up and down University Avenue between the dump, where the National Guardsmen were camped, and the venues to be protected from the unruly public. The Alameda County Sheriff’s Department also sent reinforcements. The troops were armed with tear gas, buckshot and riot sticks. There was a city-wide curfew.

I had not been involved with the park’s inception at all. I joined in the demonstrations somewhat ambivalently. The cause of a park did not seem worth the the police and National Guard beating people, shooting them with buckshot and dousing them with tear gas. Bystanders were shot and gassed. Among the incidents of collateral damage — and there were many — tear gas had drifted into an elementary school. One bystander was killed and another man blinded.

I joined a large, nonviolent demonstration on the university campus in Sproul Plaza. The atmosphere was getting scary, with police in full riot gear in abundance. I had seen this before during demonstrations against the Vietnam War, but the vibe here seemed even more charged with tension. I became overcome with anxiety and decided to go home. As I walked away from the demonstration up a quiet lane, a line of club-wielding policemen ran towards me, blocking my exit and corralling me back into the plaza. I ran like hell when I saw them coming at me. The authorities surrounded the plaza, not letting anyone out. Then a helicopter suddenly appeared, and sprayed the trapped crowd with a cloud of CS gas, a super-powerful tear gas that was being used as a weapon in Vietnam. The gas intended for the demonstrators spread through the Berkeley air to people unassociated with the protest, and into rooms at the nearby university hospital, choking patients with lung problems.

The mucous membranes inside my nose and mouth were so inflamed that I could not eat. My mother took me to an emergency room, which was packed with people injured by the CS gas. Every chair was taken and people huddled against the walls. The doctor who saw me was furious that the government would do this to its own, peacefully protesting citizens. He could not do anything to treat my symptoms, so I was unable to ingest anything except to drink clear soup for a week.

The CS gassing was a turning point in public opinion about the government actions towards the protestors. There was widespread public outrage, even forcing Reagan to somewhat admit that it was too heavy-handed.

Radio station KPFA contacted John Lennon, who was in Montreal with Yoko Ono in “a bed-in for peace.” “I don’t believe there’s any park worth getting shot for,” he said. In another call he said, “The students are being conned! It’s like the school bully: he aggravates you and aggravates you until you hit him. And then they kill you, like in Berkeley….The monster doesn’t care—The Blue Meanie is insane. We really care about life. Destruction is good for the Establishment. The only thing they can’t control is the mind, and we have to fight for sanity and peace on that level.”

The last major protest event was to be a march on May 30th, 1969 to People’s Park along the main streets of Berkeley. The mood was somber leading up to the march, with various groups meeting to come up with ways to ensure that it would be peaceful. There had been far too much violence, and no one wanted to see the march dispersed with tear gas, buckshot and clubs. The group I met with decided to hand out flowers to the marchers to remind them to be peaceful and unprovocative.

The march took place on a very hot day. National Guard lined the streets, rifles at their sides, as 30,000 – 50,000 people walked by them. Indeed, a group of people handed out daisies that were donated by the American Friends Service Committee. A few brave souls stuck flowers in the National Guard’s rifle barrels. All proceeded peacefully and there was even a cautiously celebratory feeling. I marched almost all the way to the park, then veered off the route to recuperate from the heat at a nearby friend’s house. I had foolishly worn knee-high boots and a heavy suede skirt and I was roasting. At the point I left it looked like all would be well.
In June, the city of Berkeley agreed to lease the land from the university for a park.

I turned eighteen in the middle of the People’s Park uproar. I spent the afternoon of my birthday taking a drive with the keyboard player in a local band, Notes From the Underground. We had been seeing each other for a few weeks, and I was in awe of this sophisticated twenty-seven year-old man.

The whole city was crawling with police, ready to stop anyone for any reason who looked like a hippie. Sure enough, we were pulled over by a policeman as we drove up a wooded road near the university. As the cop approached the car, John muttered under his breath that he had a stash of marijuana in the glove compartment. I could not believe how stupid he was to be driving around with drugs in a city overrun by police. My mind whirled madly, trying to figure out whether I would be tried as an adult or as a minor, since it was my eighteenth birthday. I was sick with fear. It turned out that the cop had stopped us because there was a tail light out. He questioned John, who looked straight ahead and muttered answers. I was sure that the policeman would regard this as being uncooperative and order us out of the car. Fortunately, in the end he just wrote a ticket but did not search the car. I was shaken, immensely relieved and furious at John for taking that chance with my future. I refused to see him again.

I was now eighteen and a high school graduate. I would be starting college at the San Francisco Art Institute in the fall. The events surrounding People’s Park had shaken me to the core. At the same time, I felt I was moving forward into a life that I could now shape for myself, freer of parental restrictions. I was in high rebellion mode, ready to assert my independence. On one hand I felt great optimism about the future, and imbued with the bravery of young people who still feel they are immortal and invincible. On the other hand, I felt lost and vulnerable in the wake of the brutality of People’s Park. However, throughout my roller coaster of emotions, I felt secure in the knowledge that I was part of a vast tribe that was against the war, who looked toward love, joy, peace and equality. There was still music to enjoy. I was not alone.