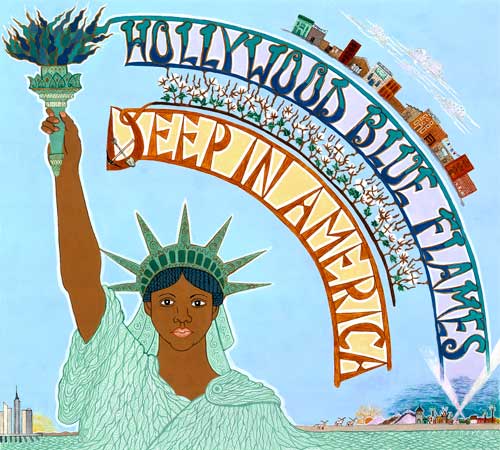 I had the honor of painting the front, back and inside covers of The Hollywood Blue Flames’ and Hollywood Fats Band’s 2010 double CD (delta groove) I also wrote the liner notes. Read more about The Hollywood Blue Flames at www.hollywoodfatsband.com (I wrote most of the website.)
The band wanted an iconic image of America that also expressed the traditional blues that they play so brilliantly. For the front cover I depicted an African American Statue of Liberty holding a torch with a blue flame. Between and above the lettering I painted a cotton field to represent the origin of country blues and a cityscape of an old neighborhood to represent urban blues. At the bottom of the cover, Lady Liberty’ s gown flows into the Pacific and Atlantic oceans, “ from sea to shining sea.” The sun rises in the east over New York City, and sets in the west over California and Hollywood.
The original paintings (but not the giclée print) are autographed in the margins by Al Blake, Junior Watson, Larry Taylor, Richard Innes, Fred Kaplan and Kirk Fletcher .

Original paintings: Gouache and pen on paper (with autographs)