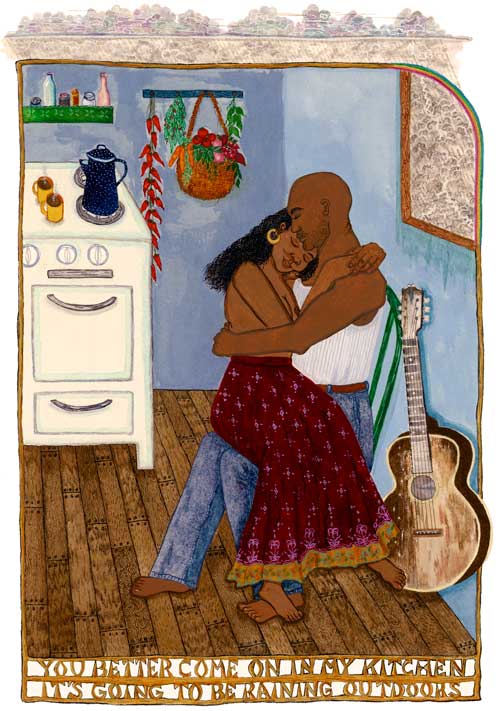 Robert Johnson #1:
Come On In My Kitchen

I first heard Robert Johnson’s song, “Come on In My Kitchen,” on the radio when I was a young teenager. The lyrics messed with my thoughts and feelings until they were a bubbling, spicy stew. Forty years after getting hoodooed by it, the song never loses its freshness or its ability to take me to a world of primal emotions and archetypal images. Although the complete song describes the pleasures and tortures of romance, here I have used the lyrics of the chorus alone to depict my idea of true love: a couple sheltering each other from the storms of life in a warm, nourishing, sexy, creative space. Kitchens mean a lot to me because I love to cook. The guitar rests against the chair upon which the lovers sit: music is part of their foundation. The triad can also be taken to represent the Vedic idea that unmanifest, pure Being, represented by the male principle, comes into creation by union with the female principle, through sound vibrations, represented by the guitar. The guitar is an image of the one Robert Johnson is playing in one of the two known photographs of him. The rainbow symbolizes divine blessings, from God’s covenant with humankind in the story of Noah in the Bible. Also, rainbows manifest when sun breaks through rainy weather, as blessings in relationships sometimes emerge after coming through rough patches.